In 2014 this Soemtron mechanical calculator worked well on arrival.  At least that was my first thought.

However, later I noticed that when I kept it plugged in for a while, the  earth leakage circuit breaker in my home was activated.

So I recently opened the casing and noted that the RFI unit became quite warm after a short while.  The entire circuit is encapsulated but a clear print shows the internal circuitry and the way it’s connected to the outside world.  I rewired it slightly to bypass the RFI-suppression capacitor which connects the two input 220V power lines. The spark reduction capacitor of 0.2uF seems OK. It shows 0.21uF on the multimeter.  Therefor I have kept the spark reduction capacitor in place.  After this modification problems were gone.

With the power unit detached the motor and the governor in particular became better visible. It looked like there was something missing and I noticed that with the centrifugal part as far activated as possible, the governor switch did not open.  So, apparently the motor was always running at maximum speed.  Not being very familiar with these machines in 2014, I didn’t mistrust the somewhat jerky movement of the carriage.  Now, with the repaired governor it moves much nicer.

Pictures below show the governor mounted on the motor, the centrifugal  part including a small fan, the governor detached as I found it and the governor with a small bearing ball in the plastic part.  Although I’ve seen this construction before, I doubt whether this is how it was originally.  To keep the bearing ball in place I had to drill a small shallow hole.  The governor works fine now.  Keeping the ‘+’ button pressed I adjusted the motor speed to 480 calc/min which is close to the specified 490.

For guidance in removing the casing, have a look in the assets page.

If manual operation is desired,  the motor shaft can me reached through a hole in the casing.  See picture below.  It can be rotated with a flat headed screwdriver. 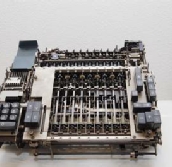 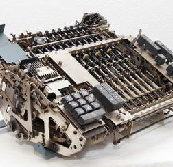 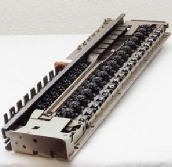 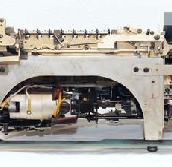 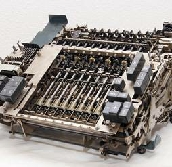 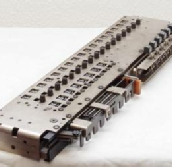 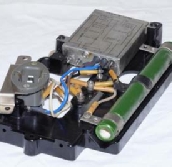 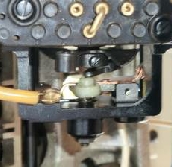 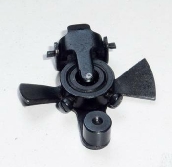 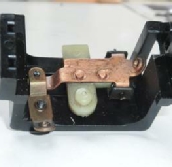 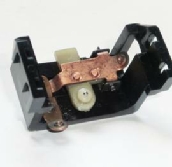 governor base as found

governor base repaired with a small bearing ball 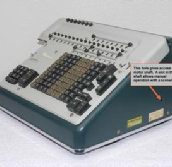