When I received it, this calculator was in a reasonably nice condition. It could add en subtract, but the carrier transport didn’t work properly and division didn’t work at all.   With this Hamann I learned that removing the carriage is very easy ..........  if the machine works properly.  If it doesn’t, removing it can be a tough job.  However it is necessary to reach some parts that may obstruct it from working properly.

With the machine in its normal position on the right-bottom of the carriage there is a small peace of steel attached with two screws (see photo  A). Once that has been removed, the carriage should come out easily. To remove it move the carriage to the far right.  After removal the carriage can be moved to the left until it comes free and can be taken out.  It’s best to operate the carriage by hand using a special tool that fits the main shaft.  At the same time push the right-tab key respectively the left-tab key. Using motor power is also fine if the machine functions well.

If the carriage seems to be blocked, there is one thing to check:

Did the main register (Reg I) finish its 360 degree turn? If not than the carriage is firmly hold by two mechanisms. One is visible on the photo “C”  at the yellow arrow.  The other is underneath the carriage and only visible after the carriage has been removed.

Many, perhaps most machines suffer from leaking or removed capacitors.  In this machine they were removed. That’s not OK for the circuits that take care of contact spark suppression. I tried to recover the original suppression circuitry.

If a leaking capacitor is “on power” constantly it will slow heat, leak more, become heater and finally explode.  If it does it may spread a lot of  sticky, hard to remove dirt inside the machine. 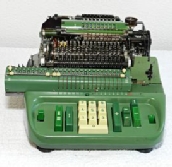 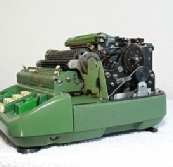 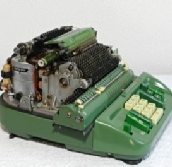 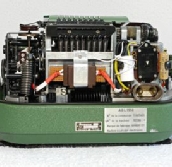 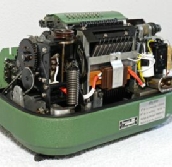 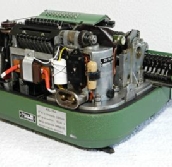 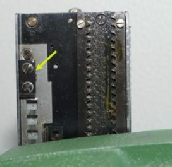 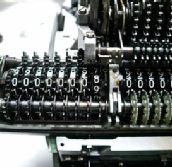 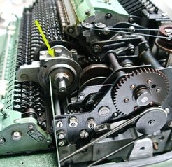