This RA16 was in a very nice condition, but mechanically blocked.  It took cleaning and partly disassembling to get it running.  When it finally started moving, it didn’t count right.  Each of the 8 input digits seemed to count 1 more in register III or II then it should. E.g. when 00000000 was entered,  11111111 was added to reg III or II.  Subtracting 00000000  resulted in 99999999.
Digits are keyed into a pin box.  From there they are transported to toothed racks which transfer the number to reg III or II.   The cause of the malfunctioning appeared to be in the toothed racks of the input register.   Apparently they lost length.  The racks showed remainders of rivets and some kind of  decayed  plastic.  I can only guess that there had ever been a plastic extension  for noise reduction. Photo A2 shows in three stages from left to right how I constructed small pieces that are glued  onto the front end of the racks. Photo A1 shows the end result.

Of course the RA16’s casing had be removed.  Mechanical tolerances are  very small, making it a tougher job than expected.  The easiest  way perhaps is to loosen the screws of the carriage in order to create some extra margin, than remove the back cover and next remove the front cover.

I took the keyboard cover off (See photo C) and than noted that it didn’t help me much.  There are only a few moving parts.  Putting the cover back wasn’t easy to say the least, so I would advise: DON’T TAKE THE KEYBOARD COVER OFF .

Photo B shows the memory.  It is located on top of register II and easily visible,  It consists of  8 toothed racks which can be connected to reg. II  with the left of the two levers on the carriage.  The right clears the memory and at the same time brings the contents back to reg. II.

The machine is driven by an asynchronous motor which will need little maintenance.  The large yellow capacitor is needed to start the motor. 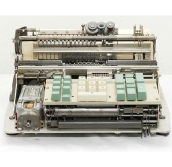 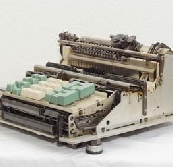 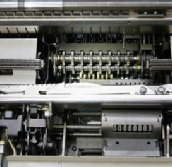 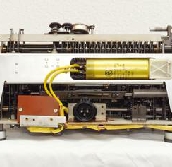 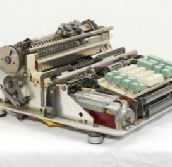 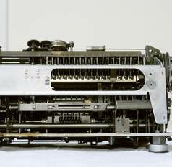 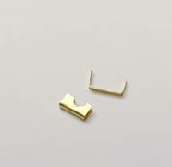 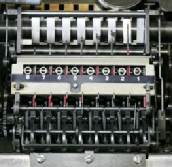 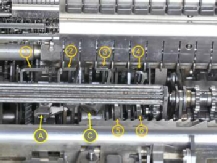 D: Six clutches on the left and six on the right side + three sensors (A, B and C)