At first sight this little machine isn’t very impressive.  It lacks the large amount of buttons, switches and levers spread all over  the machine as you find them on many high end machines of competitors.  However, it appears to be a very capable machine.  Inside I noticed the absence of adjustments.  The Hamann 505 and Friden SBT10 for example have many adjustments.  The Olympia ...... I found only three and they are simple ones not being mutually related.

Contrary to most other machines,  the right register (reg. II)  does not count the number of operations. It can be used like reg III for addition and subtraction.  So, there are two independent registers to work with.
Furthermore back transfer is possible from each of these two register to the input register (reg I).  This also makes it  possible to transfer a number from reg III to II and v.v.  There is also an 8-digit memory. It is located at reg II and can be connected to reg II when desired.  Once connected, a clear of reg II moves its original contents to that memory.  Back transfer and memory make this a very flexible machine, suitable for complex calculations without writing down intermediate results.

Apparently two RA16 versions exist.  A brochure shows a version without the button “X III” which clears reg IIII in advance of the multiplication. My version has the extra button.

(*) In 1965/1966 more and more electronic calculators became available, but at prices much higher than this RA16.

Enter 1st  number,  push the ‘X’-button.  The 1st number appears in reg II.
Enter the 2nd  number, then push one of the following keys:

Remark:  The carriage is automatically positioned in the proper positions.

Remark:  The carriage is automatically positioned in the proper positions.

Function of some keys, switches etc:

- If the left lever is in down position,  the right lever copies the contents of the memory to reg. II

- If the left lever is positioned upward,  the right lever clears the memory.

Function of all keys, switches etc:

See the assets page of this machine 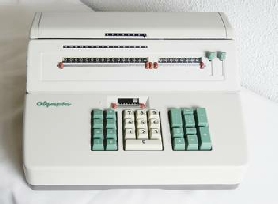 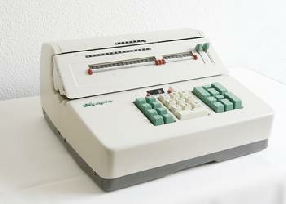 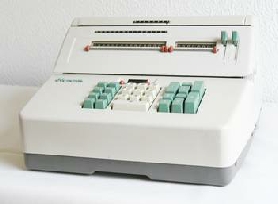