The Sharp PC-1500 is one of several programmable devices which were introduced in the mid 80s.  I found it on the German Ebay  together with the CE-150 cassette interface with 4-colour plotter,  the supply and other belongings.  Later I found a brand new CE-152 cassette recorder.  The box had never been opened.  Luckily it functions flawlessly.

Together the PC-1500, the CE-150 and CE-152 form a system which could be considered to be one of the very first  affordable computers.

Compared to the mechanical calculators which were still sold in the late 60s and early 70s  this machine was a giant step forward. It was loaded with mathematical and statistical functions and came with about 8KB internal storage. Internally there is space for an 8KB RAM extension module. It could be programmed with a proprietary Basic programming  language. Complex functions which are to be applied to many values can be stored with a “MEMO” function and repeatedly executed with a “CALC” function.

Programs as well as data can be stored on a cassette recorder.  For that purpose the CE-152 was sold, but any cassette recorder would do.  The CE-150 cassette interface contains a small 4-colour plotter.  It can be used to print program listings, program results as well as results from manual calculations.

See link to a user manual on the assets page 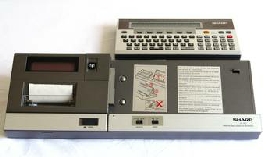 Many mathematical functions. Programmable in a proprietary Basic language